The charm of blue images

The ancient photographic technique of cyanotype allows creative amateurs and professionals to experience "blue wonders". It conjures up the shadows of time on paper without much work in the sunlight.

Photography can sometimes be child's play. A brush, a sheet of paper and some light-sensitive liquid - you don't even need a camera or a darkroom for so-called blueprints. Your picture is exposed in nature, for example, in the sunshine of a beautiful summer day. The process is so simple that even preschoolers can conjure up little works of art without much photo lab knowledge. And it really does seem a little magical every time a motif suddenly appears on the paper and is reproduced in wonderfully warm, blue colors.

From blueprint to photo art

The term blueprint first became established colloquially at the end of the 19th century among architects and engineers, who used this technique to copy building plans. However, artistic interest in the blueprint, also known as cyanotype, has never been as great as it is today. Blueprints combine decelerated work with intuitive creative techniques that leave room for chance. Simple photograms with applied objects such as leaves or grasses can be quickly created even without prior photographic knowledge. Whether copies of silhouettes, drawings or negatives from the inkjet printer: the so-called "light tracing" ultimately leaves plenty of room for photographic experimentation.

Easy as pie: coat the paper and get started

The steps involved in making blueprints are straightforward. Buy so-called cyanotype sets at an artist supply store (or gardening store) and apply their light-sensitive liquid ideally to watercolor paper. Now you should let this solution dry in, protected from light, while you prepare those design materials that you will later place on the paper. Think about which shapes are suitable for beautiful, silhouette-like photograms. Now, for the moment of exposure, place the paper and your photo subjects in the sun until the paper surface turns a dirty gray. As soon as you water your print, you stop the development process and the motif turns blue.

The botanist and lithographer Anna Atkins was the first to publish a book of photograms of plants in the 1840s, which is now considered the first photobook in history. Her compatriot, the British astronomer Sir John Herschel, had invented this simple photographic process in 1842 and called it cyanotype. His completely non-toxic process is based on light-sensitive iron salts. An initially yellow, light-sensitive layer oxidizes to blue when exposed to UV light.

When the sea paints the pictures

In the 1970s, Pop Art artists such as Robert Rauschenberg experimented with cyanotypes. Today, there are a number of prominent photographic artists who work "cameraless," exposing their images directly as photograms. For example, in her project "Re-Turning Around," Austrian Eva-Maria Raab let the waves of the Mediterranean wash over the cyanotype paper on the beach of the Greek island of Ithaca. She then marked the edges of the waves, which had dried in the sun, with gold pencil and transformed her motifs into abstract maps. Imaginary cartography that refers to Odysseus' odysseys and the search for the (artistic) universe. And a work that gives the term "watercolors" a completely different meaning. 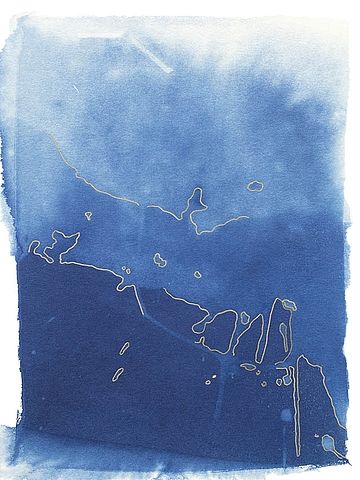 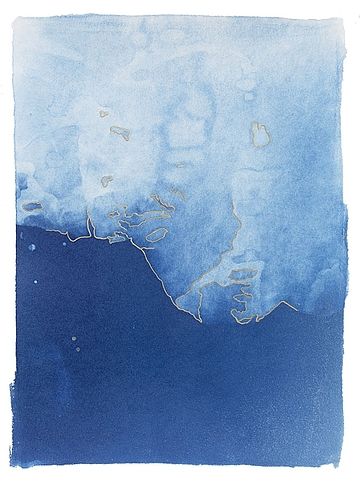 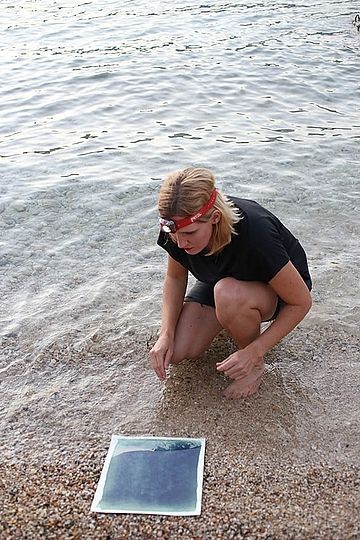 The photo artist: Eva-Maria Raab on the beach on the island of Ithaca. Here the Austrian is exposing cyanotypes. 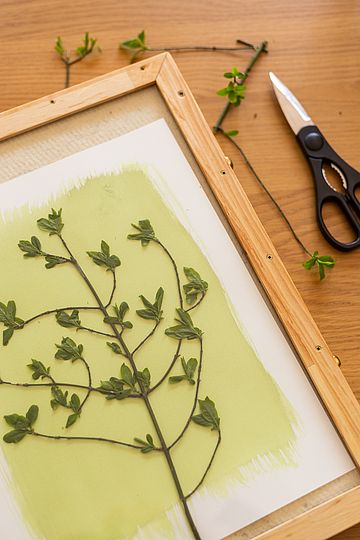 Cyanotype in a wooden frame: For a photogram, they place a plant on a coated paper. When the yellow color of the applied cyanotype solution has turned to dirty gray, the exposure is complete. The blue color emerges only after the subsequent rinsing and drying of the print.