Curator, Art Director, Chief Representative of all Leica Galleries and jury member of the international Leica Oskar Barnack Award: A native of Freiburg, Germany, Karin Rehn-Kaufmann is one of the defining figures of the many cultural activities of Wetzlar-based camera manufacturer Leica. On October 15, Karin Rehn-Kaufmann will be an interview partner in this year's keynote presentation by German fashion photographer Joachim Baldauf on the PHOTOPIA stage. Leica will dedicate a large PHOTOPIA image show in the Streetside Gallery to the innovative photographer. A conversation about the tasks of photography, the new importance of photo events and the "Spirit of Leica".

hat is the significance of a major event like PHOTOPIA for the German photographic scene?

Karin Rehn-Kaufmann: For me, PHOTOPIA and other trade fairs have a significance after the end of photokina in that they have to be repositioned. It's no longer just about cameras and pixels. In my view, this train has long since sailed. Today, you have to look at how to bring culture, documentary photography and, above all, the photographers themselves into this context with talks, interviews and workshops. For me, the camera plays the second role; the first role is really the image.

How has the task for photo events changed since the end of photokina?

Karin Rehn-Kaufmann: At the beginning of digitalization, the focus was of course on technology, because it was all brand new. That's no longer the case. It has "pixelated out." Now it's all about the image again. Against this background, you have to reposition yourself and think: What does photography want in the future, what should it achieve? What is its task and how can we communicate this vision with such a fair?

What is the changed task of photography - or was it always the same task?

Karin Rehn-Kaufmann: On the one hand, of course, it is the same task, because it is meant to record history, to document it in all its different facets. But today it is also a matter of paying attention to the quality of photography, to documentary photography and the "fake news" that is also produced with photography. One must also try with such fairs to present a certain truthfulness and to say: This is important to us.  Everyone takes pictures today and takes pictures of some kind. Nevertheless, there is also a difference.

What is Leica planning for PHOTOPIA 2022?

Karin Rehn-Kaufmann: We will take over a great outdoor area there. And it will be with a German photographer: Joachim Baldauf, whom I hold in very high esteem. He has designed a new concept for this area. What he's planning is pretty sensational.

Why did you choose this particular photographer for Hamburg?

Karin Rehn-Kaufmann: I appreciate him because of his creativity and because he always brings a concept on location that fits exactly. I like the way he works with graphics and with words. He combines word and image and brings humor to it. Joachim Baldauf thinks everything is so serious today anyway. You have to bring humor into photography. This creative head is also a designer - and it shows. He will design a huge exhibition area with 48 pictures. His pictures will not be printed on Alu-Dibond, but on cardboard. And what do you do with them after the exhibition? Joachim came up with the idea of giving the prints to his students afterwards - with the assignment of creating a new work of art from them. This exhibition will be about fashion, about texts and about a color frenzy. It will run like a rainbow over the entire square.

The cooperation between Leica and PHOTOPIA is designed for the long term. Has the further development of this cooperation already been determined in terms of perspective, or will it be negotiated from event to event?

Karin Rehn-Kaufmann: The latter is the case. I'm always brought on board when it comes to exhibitions on site.

What actually constitutes the "Spirit of Leica"? There is much more behind it than just a brand. Even the mention of the name conjures up images in some people's minds.

Karin Rehn-Kaufmann: Of course, I'm always very excited about that, because I don't know that from brands. My husband and I answer the photographers personally and don't pass on requests to assistants. We always want to be there in person. In short, we run this business from person to person. And the photographers really appreciate that.

Today, we have built four pillars of culture at Leica. There are 26 Leica galleries worldwide, and next year there will probably be over thirty galleries. That's a breathtaking exhibition network. The photographers experience this, of course: they are given a platform!

What makes the medium of photography so special for you?

Karin Rehn-Kaufmann: I'm fascinated by pictures that tell stories. And the ability to freeze a moment, to be wide awake in that moment. There are many stories about how long a Cartier-Bresson or a Frank Horvat waited until the moment really arrived. This special gaze and this "soulful eye" is something that always fascinates me about Thomas Hoepker as well. I have just seen the new documentary film "Dear Memories" about him, which impressed me deeply.

Above all, I'm also always fascinated by the people behind the photography!

How strong is your desire to take photographs yourself, after you otherwise spend so much time on other people's photos?

Karin Rehn-Kaufmann: The incentive is there. I actually just bought a small analog because, like you, I see so many pictures every day and don't feel like looking at my own and editing them first. So I've come back to analog film, which I take to be developed. I then stick the pictures in a photo book. I've been struggling for a long time, because I wouldn't get around to creating any image folders in the computer myself and wouldn't look at them anyway. So I thought this would be a good way to go: back to film! I had my first grandson four weeks ago. That's where it starts: You want to capture these new moments, of course.

Do the many facets of your job change over the years?

Karin Rehn-Kaufmann: Yes. To the extent that the work for the museum has once again become a substantial part of my curating. I've been doing that for two years now and would like to exchange ideas with other museums in the future. We don't always have to produce just one exhibition for the Leitz Museum. Now we're going to take over the Andy Summers exhibition from the Bonnefantenmuseum in Maastricht.

However, on the other hand, it excites me every time to curate myself as well. With Andy Summers, I designed (for the exhibition at the Leitz Museum) a "Police" room with wallpapers on which we stuck a film reel with individual motifs from the complete Police years.

I'm always amazed at the photographic celebrities that are presented at Leica. With some of these stars, you didn't know at all beforehand how well they photograph. In the past, stars were pigeonholed: the musician, the movie actor, etc.

Today, it's much more recognized that some artists can be multi-talented.

Karin Rehn-Kaufmann: That's very important! Markus Lanz, for example, is a damn good photographer. Or another one: George Amin. The musician plays in the West-Eastern Divan Orchestra and is an excellent photographer. But also all the unknown amateurs: The gap between a professional and an amateur is often not big. 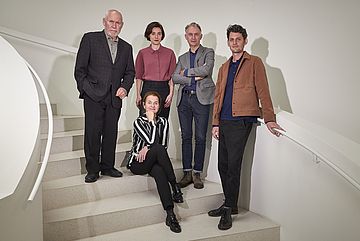